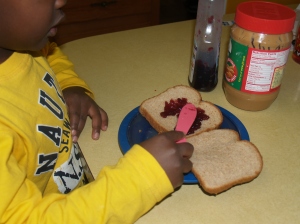 Another weekend is winding down, and as I measure how it went, I have to say not too bad overall. Jay made his basketball debut. Hubby says he did a good job and enjoyed it. He learned to dribble with one and two hands and practiced shooting. He talked excitedly about what the “basketball man” (i.e., coach) taught him. Hopefully, I’ll get to see him in action when the next lesson takes place in two weeks.  Although I missed his first day at basketball, I was right there when he made his first peanut butter and jelly sandwich (with a little bit of help), one of his favorite things to eat, and announced “Mom, I’m gonna be a chef when I grow up.”  I said, “Oh, yeah?”  Then, he said, “What number do I need to be?”  I had to think a few seconds about what he meant, and my first thought was to say “18” because that is the age at which I hope Hubby and I can begin downsizing to a condo and traveling the world.  But, I figured that he’ll need time to complete culinary school, so I answered “21.”

Mae enjoyed her third meeting with the social skills playgroup on Saturday. She and Ms. N had a talk afterward about the importance of listening and following instructions. Apparently, Mae resisted moving from one activity to the next. Once she starts having fun with something, it’s hard to get her to shift focus.  She’s great at ignoring the sound of an adult’s voice, especially if some sort of instruction is being given.

Later on Saturday, I took her to a laser tag birthday party for one of her oldest friends, Taylor, a boy that she started daycare with when they were both 3 months old.  Generally, birthday parties and similar social situations are a source of dread because of a latent threat of fun turning to fright if play doesn’t go Mae’s way.  However, I looked forward to Taylor’s party and went in more relaxed because our family has been celebrating birthdays and having playdates with his family and several of the other invited families for over 6 years now.  The parents and children know Mae as an energetic, spunky and talkative kid, and they would expect no less from her.  She generally plays well with this group of kids and doesn’t require as close supervision as with kids that we have not known as long.  The moms and dads follow the “it takes a village” approach and will call her out if they see her begin to show attitude.  Well, she enjoyed laser tag and I did too — so much so that I’m thinking about having my own laser tag party when I turn 40 this year!  Everything went well right through the birthday song, cake and favor bag distribution.  Just when we should have been putting on our coats and thanking the birthday boy for inviting us, Mae dropped her bomb.

“I didn’t get to play much on the arcade games.”  Huh?  As we’d waited for more guests to arrive, I’d let her play one round of an impossible game that involves pushing a “Stop” button at the precise moment that a moving light lands on a red bulb to win an MP3 player or some other shiny gadget.  Ok, one more arcade game, and then we would go.  Of course, she wanted to go back to the impossible game.  I tried to steer her towards something that might last a few minutes, something where maybe she could actually earn some points and not feel like it was a total waste of time and coins.  What about the skateboard or dance game?  Noooo.  She marched right over to the MP3 player showcase and dropped two tokens for one chance to push “Stop.”  As the light landed just one bulb past the prized red bulb, Mae’s face went long, her shoulders slumped, and the whining began.

“I didn’t get to play much.”  She said that she wanted a toy and she hadn’t gotten any toys.  I pointed out that there were toys and treats in her favor bag.  Mae’s eyes started to fill, and I resorted to threatening to return the favor bag to Taylor if she couldn’t hold herself together.  She began whining again as we pulled out of the parking lot, and I all but lost it.  I told her that outings with her are more fun when she shows gratitude for what she did do and have instead of complaining about what she didn’t get to do and have.  Then, she began one of most unnerving spiels — “Nobody likes me.  Nobody wants me anymore.”

This is a common ending for us.  Hours of fun can come undone if there comes a point when Mae doesn’t get something she wants, whether it’s more time at the venue or a souvenir or toy.  If I know what the pitfalls might be, we have a talk beforehand — usually in the car after we reach our destination — so that I can set the ground rules and manage her expectations (e.g., We can play games at Chuck E. Cheese, but we will not buy any toys at the end.  We are going to play, not to shop.  Do you understand?  Yes.  Do you agree that there will be no whining, crying or complaining when it’s time to go?  Yes).  “The talk” is an effective technique, I think, in part, because Mae places a high value on sticking with a deal.  She’ll keep her word and she expects the same of others.  As this was our first time at the laser tag/arcade venue, I did not know to have “the talk” in advance.

Next Saturday is bowling for Jaden’s 7th birthday.   You best believe we’ll make a deal before we get out of the car.