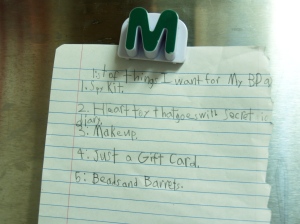 March 25 is the big day — Mae’s 7th birthday.  Of course, she is very excited.  She made her birthday wish list a couple of months ago.  At one point, she reasoned that seven is close to being a pre-teen and pre-teens get to [I usually tuned out at that point because, frankly, I don’t care what pre-teens are doing and I’ll worry about it when we get to it].

She wanted to pack on Tuesday night for our one-night trip to Philly, where we’re going early Saturday morning to celebrate by seeing the Liberty Bell and visiting some museums.  I thought a short roadtrip would be less expensive than providing pizza, juice boxes and cake to twenty-something first-graders at an inflatables warehouse or overrun arcade.  Wrong.  Hotel + gas + tolls + meals on the road for four + museum entrance fees + Moona Luna concert tickets = I should have done the math before I suggested this idea.

At any rate, the Philly trip will be fun, and I have my own reason to be excited about age seven.  I’m reading Dreamers, Discovers, and Dynamos:  How to Help the Child Who Is Bright, Bored, and Having Problems in Scho

ol by Dr. Lucy Jo Palladino. She says that at about age seven, a major change takes place in a child’s ability to reason.  They begin to better understand the relationship between cause and effect.  Interestingly, we have been enjoying longer stretches of peace at home.  I don’t know if it’s the age or the result of being consistent about our routines and rules.  Also, we added a new component recently to our morning routine that helped cut down on fights about getting up and getting dressed:  an hourglass that Mae has to beat in order to take her Nintendo DS to aftercare.  It’s been far more effective than the cellphone timer we were using.  Maybe it’s that the sand is purple, one of her favorite colors, or just seeing the time past versus hearing us say how many minutes are left.  Or, maybe it’s just her competitive nature.  We may never know, so I may as well have faith in what Dr. Palladino is saying.

The last age we were told to watch for was five.  Mrs. O, the preschool director, advised us that we would see a major shift in maturity at five.  And, she was right on target.  About three weeks before Mae’s fifth birthday, there was a break in the clouds.  She started to mellow out and control her emotions a little better.  Prior to five, her meltdowns were toddler-like.  She was having trouble growing out of the type of crying and whining that one would expect from a two- or three-year old who doesn’t get her way.  She continued to lag emotionally behind her peers.  Still, there was a noticeable improvement.

So, what the heck, I’m claiming seven as the age of reason.

But, uh, we’ll keep using the hourglass since purple is such a nice color.

I'd intended to bake a mini cake, which is perfect for 4 servings. However, Mae asked for a chocolate cake with "Happy Birthday" written in cursive with chocolate chips and a smiley face. So much for keeping it simple.

To Philly and Back