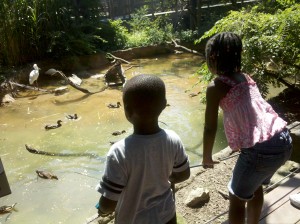 Mae is near the end of her first week of camp at her regular school and it’s been a so-so week.  Monday was the hardest day so far, and the tough parts were during unstructured play time.  My poor babe had trouble getting that there are times when little boys playing their handheld game systems would rather not have a little girl looking over their shoulder or sitting at their knee looking over their arm.  Monday evening, we read and talked about a social story I wrote for her about what you can do when someone says”no.”  I understand that it’s confusing for her because, she says, sometimes the boys would let her watch them play, and she “wasn’t doing anything wrong.”  That’s been one of her most used lines this week.  Emphatically, “I wasn’t doing anything wrong.”  It’s always the other kids; they are mean and they get her in trouble.  I did get Mae to agree that if someone says “no” the first time she asks to play, then she won’t ask again and she’ll look for something else to do.  I know it will be hard for her to honor that every single time.  Hopefully, she’ll remember at least some of the time.

Today, Mae declared that she doesn’t want to go to any summer camp at all at this point.  She had a tough day, which she seems to measure now by how much she cried.  Monday, she cried almost the whole day.  Tuesday and Wednesday, she only cried once (said each day in a positive tone as if to make me feel better).  Today, she cried a lot.  It was some of the usual stuff — she thinks some kids were ignoring her when she wanted to play with them and she says a fourth-grader threw her to the floor while they were playing sharks and minnows.  After the latter instance, the teacher made her sit out for five minutes and “nothing happened” to the boy.  Hmmm.  Sounds like there is more to that story, and I’ll ask the teacher about it tomorrow if I remember.

I know at least some of today was good for Mae because she was playing happily when I arrived at the art room.  Once she and Jay were buckled into their seats, they were both excited to tell me about the Mad Science demonstrations they had seen (the week-long Mad Science camp was canceled due to low enrollment, but the school arranged for one Mad Science day).  Mae and Jay both said it was the best part of their day.  And, Mae was wearing a yarn necklace that a fellow camper had made for her.  Unfortunately, Mae sometimes lets one negative incident define the whole day for her.  She is the minnow and all the other kids (and sometimes the teachers too, as she tells it) are the sharks.

I have my own measure for how Mae’s day goes.  If Hubby and I have a day with no phone calls, no emails, no conversations with the teacher at the end of the day, and no glares from other parents picking up their kids, then that is a good day.

I will be out-of-town next week for a job-related conference in California, which means changes to routines, and . . . oh, I’m just not going to even think about it right now.  Hubby will have to dust off his superhero cape.  I will instead think about the packing I haven’t done, which is almost all of it.  More precisely, there is one outfit at the foot of the bed and the suitcase is still in the closet.  I intended to log into my work computer this evening to try to get ahead on some things, and that is clearly not going to happen now.

I will give myself credit for going to the gym this evening, which I considered not doing because I still have unanswered questions about my health.  I still feel fine, despite the numbness that continues to rove from limb to limb.  I’ve had normal results from a carotid duplex (ultrasound of arteries in my neck), EKG, cardiology consultation, MRI, neurological consultation, heart ultrasound and basic blood work, which all indicate no MS, brain tumor, or stroke.  Today, I had five vials of blood drawn for more extensive bloodwork to test for things diabetes, HIV, blood cancer, thyroid abnormalities, and vitamin deficiencies.  Boy, oh boy, does a vitamin deficiency sound delightful right about now.

I have at least one more task to complete before I go to bed.  I have to send an email to the supervisor of the lab I went to for the bloodwork.  I’m anemic with small veins and normally low blood pressure.  The first lab worker who tried to get blood from me was unsuccessful after poking both arms, not an unusual experience for me.  I asked if I could return later in the day after drinking more water.  When I returned two hours later and Lab Worker #2 was told that I had been there earlier and my veins wouldn’t cooperate, she placed her pen on the counter firmly and put on a “Don’t worry, I’ve got this” face.  I thought, “Oh boy, an ego trip is coming on and I’m going to get poked relentlessly because she has to prove that she can get blood from a stone.”  I learned to ask for another nurse or offer to come back later if I get a cocky one.

Fortunately, yes, Lab Worker #2 accepted this as a challenge, and she was smart about it.  After her first poke came up dry, Lab Worker #2 switched to the other arm.  She tied the rubber band thingy above my elbow.  “Uh-uh.”  The veins didn’t look or feel good, so she didn’t bother to poke.  She removed the band and tied it around my wrist, very, very tightly.  Then, she placed a heat pack on the back of my hand to increase the blood flow and make the veins bigger.  That was a first for me, and it worked.  Lab Worker #2 was kind and apologetic throughout the process and asked several times if I felt ok.  So, I told her that I would send an email to her supervisor to say what a good job she had done.

After that, I’ll get some zzz’s and get cracking in the morning.