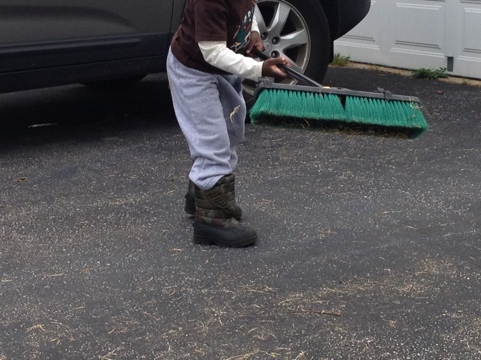 From the days when my 18-year old brother was a little boy, my mother refused to allow him to wear his shirt tails out. His shirt had to be tucked in, and he had to wear a belt. I used to feel sorry for him, and my sisters and I, all older than he, sometimes teased that he looked like an old man. Pants sagging on the hips or lower? Never. Now that he’s a teen, he can wear a t-shirt or casual top out, but Mom still keeps a close eye on him.

In the wake of this mess that George Zimmerman created, I have a new perspective on special Rules taught by parents of black boys. It’s pathetic that parents are put in this position. It’s a negative way to live — what can I teach my son to do in order to decrease the risk that he will be feared, profiled, maligned, hunted, cornered, killed because he is brown-skinned? And, all you can do — at best — is decrease the risk. You can do nothing to stop an overzealous or mentally unstable (or both) gun-toter from crossing his path. What kind of mess is that?

I’ll have no choice but to teach Jay the Rules about how to dress, how to walk, what to do if (or when?) stopped by police. I take some solace in believing that George Zimmerman is one person, that he represents a small minority in the grand scheme of things. Though many are prejudiced, most will not obsess and do physical harm. And, among those who harm, some will be arrested the first time and justice served. Take the case of the white teen who was sentenced last week to life in prison for the 2011 race-based killing of a black man in Mississippi. Of course, one case is not enough to declare the criminal justice and court systems fair, and it does nothing for Trayvon Martin’s family. I’m encouraged further by the widespread, wildly diverse voices in support of justice for Trayvon and his family. I want to live in hope, not fear. Actually, what I really want is a purple-tinted bubble, but that’s a different post.

The PTA had its big fundraiser Friday night. It was a huge success, with a few hundred attendees and over $4000 in profits. Mae’s Korean class performed, and she did an awesome job. I was especially proud of her self-control while she sat and waited for her group to be called to the stage. She kept her hands to herself, no horseplay or jostling around.

I enjoyed working the event, and the committee work turned out to be not so bad. I was so proud of myself for showing up in a Chinese dress that I bought for $2 at a yard sale. Then, I spent $98 on silent auction items. So much for being frugal. Hey, I did it for the cause.

My baby girl Mae turned 8 on Sunday! Eight feels like such a big age. No more booster seat and one year shy of when a co-worker’s daughter started her menstrual cycle. Yikes! Well, we went to the bank and opened a savings account for her. The bank rep was so cool to play up the big-girl thing by addressing Mae as Miss, asking her directly for her full name and contact information. Mae was flashlight-quality beaming. She slowly counted up and handed over the $51 she’d received from friends and relatives for her birthday. (It’s understandable why she cried when I told her no more birthday parties. Chica racked up $75 in movie theatre gift cards. I forgot to include “no gifts” on the party invitation.)

I don’t like to think about my kids growing up. It’s too much. So, I try to focus on the little things, the good things, the day-to-day stuff. The big stuff gets scary and disheartening. I know it’s lurking out there, in a Zimmerman kind of way. For now, I’ll work on my bubble.

Moving Up and On