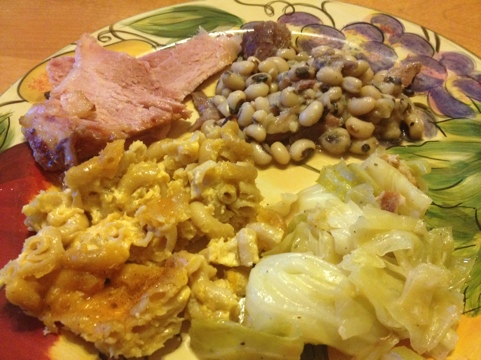 Phew!! We made it through the holiday season.  I got away with my simple holiday decorations, although before it was all said and done, Hubby and the kids were saying that we should have had more lights, including some outdoors.  Hubby says he’ll put up lights next Christmas.  More power to him.  I’m sure he’ll have it all done by the 12th of Neveruary.

Even though Mae received some of the items from her wish list and several other surprises, she still feels cheated because she didn’t receive any gifts on the actual day of Christmas, and there were no presents under our tree when we returned from SC.  Despite his failure to find us in SC, Mae decided that she still believes in Santa Claus.  Jay wasn’t hung up on who gave him what and on what day. I think he lost track of the days and wasn’t sure which was 12/25. Next year, Mae has declared, we will stay home for Christmas to avoid any confusion.  I’ll set this aside for now.  It’s not worth debating at this point — and trust me, debate she will.

We did stay at home on New Year’s Eve.  Mae and Jay were up at midnight, and the four of us toasted in the new year with sparkling grape juice.  Mae wanted to also toast with toast, as in toasted bread, which she thought was such a funny idea. If I hadn’t been so busy fussing with red velvet whoopie pies and trying to get the right consistency for the filling, I would have entertained her.  As it was, I left the cakes just long enough to clink glasses with Hubby and the kids.

I made no monumental resolutions for the new year.  I plan to eat less white flour and sugar (ignore the fact that the first item I ate in 2012 was a whoopie pie.  Since I was making them for my co-workers, I had to test them).  I skipped rice for the “good luck” meal and used whole wheat pasta in the mac ‘n cheese.  I’m taking on the philosophy that every decision I make about food counts, and the micro decisions are important steps to cutting back.

I want continued health and growth for myself and my family.  We’re good and we’re getting better.  Mae is maturing.  I see progress in her emotional control and social skills, and I see progress in my ability to manage the difficult moments.  Jay is maintaining his independence.  At times, he imitates some aspects of Mae’s behavior in an attempt to get his way.  But, for the most part, he has his own mind and makes smart choices based upon his own strong sense of right and wrong.  I have to remember to encourage and nurture his individuality.

I have an unofficial job offer for a position that will allow me to work from home up to four days a week.  I’m excited about the potential new challenge and learning opportunities, and even more so about the possibilities for worklife balance.  The time I can gain from commute-free days.  Lunch dates with Hubby, who works close to home.  Exercising and starting dinner during my lunch hour.  So many possibilities.

And, my last “want” for 2012 is a new kitchen.  I’ve been wanting a new kitchen since we moved into this house in 2006.  The stained, torn linoleum and busted cabinet doors and drawers are really getting to me now.  I’ve vowed to scrimp and pinch my way to a renovation this year.  Hubby is on board, or maybe just afraid to get in my way.  He’s a smart man, notwithstanding the thing about the Christmas lights.